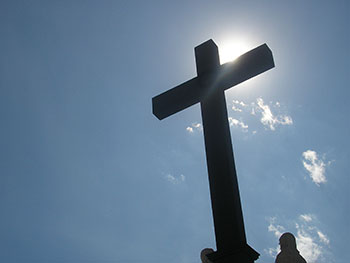 Sean was never afraid of dying. He worked so frequently around death, it was no longer a morbid or taboo topic of thought or discussion. He did military funeral honors for five years and worked for Lynch & Sons Funeral home before getting picked up for AGR (Active Reservist) with the Army. He was baptized as a Catholic but attended a Baptist church with his mother growing up. As an adult, Sean didn’t frequent church much outside of holidays and sometimes, not even then. His relationship with God was complicated, he believed in God but also struggled with many questions that went unanswered because he was afraid to seek religious guidance with thoughts that to some, may seem blasphemous.

I was also raised traditionally, and unapologetically Catholic- guilt and all. I shied away from the church and came back multiple times throughout my young adult life, but after Sean killed himself, I had NO interest in returning to church. Why the hell (pun intended) would I want to go to praise and worship someone that gave me the greatest joy of motherhood only to rip away my greatest love?
I was angry.
At Sean.
At the Army.
At myself.
But mostly, at God.
Why
WHY
How could He do this to me? What did I do to deserve this?
I asked my best friend, a devout Catholic to go to church with me in April 2018. I was a month away from having Gwendolyn and felt like I needed to get my mind and heart ready to raise this baby alone. We went to church together, she helped me through the mass, slowly things started to come back to me and I felt that good ole’ Catholic guilt for having been away from the church for so long.
After that, I found a church that I liked and have been going every Saturday since. I signed Luke up for Catechism and took the parents’ class to have Gwendolyn baptized. I sat amidst happy couples and their bouncy babies feeling sorely out of place. When the Deacon asked me if the father consented to the baptism, I simply stated “He died” *queue awkward silence and pity eyes from everyone in the room*

After the class, the deacon stopped to pray with me, he confided that his wife had died some years ago and asked me how Sean died. “It was a suicide” I mumbled under my breath. This was the moment I had been avoiding. In old Catholic teaching, suicide was “the ultimate, unforgivable sin” for you had taken away God’s most precious gift-clife.

Only He who giveth can taketh away.

The deacon shared sincere condolences with me, and I went about my day. About eight months later, I decided I needed to discuss my unrest with the Pastor, and see where he stood on suicide. It didn’t sit well with me- the idea of attending a church lead by someone that might condemn myself or my husband for the way that he died. I sat down with the Father and told him my story. His answers both validated me and brought me peace;
On eternal damnation for suicide;
“God doesn’t judge a solitary moment, but the big picture.”
On being angry at God;
“God has big shoulders. He can take it.”
On moving forward after loss;
“He might have taken his life…but he didn’t take yours too.”
For an hour and a half, we had a meaningful, sincere and comforting conversation about suicide and the Catholic Church’s evolving view on it. I could write on and on about on conversation, but some of the main take away is;
That suicide, in God’s eyes, may be viewed as a moment of obscurity, where the individual is not themselves and is not thinking clearly.
Yes, suicide is a choice but the only reason it seems to be viewed as a “no no” is because society has made it so. If a diabetic chooses to ignore their diet and eat pie every day, are they not also killing themselves slowly? Well, yes- but it seems to be more acceptable because who doesn’t love pie!? If someone with lung cancer continues to smoke are they not also killing themselves slowly? A drunk with a bad liver? Yes- but the methods are all acceptable in societies’ eyes. Or at least, more acceptable than shooting yourself in the head. Oh, but if you suffer mental illness- You’re crazy.

I have realized I dislike the term “journey” to describe my grief. This is not a journey, there is no destination. I don’t know what to call it exactly but what I can say is that I have begun to take steps to make peace with the shit hand life, God, Sean- whoever- delt me.